Oh my! A new follower of mine, E. over at Whinging at the World, has seen fit to award me the Honest Scrap award! 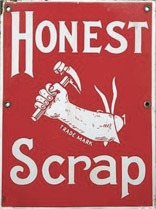 Notwithstanding I don't have the slightest clue what the heck it is, yay me!!! As a relatively new blogger, I do sincerely love getting feedback like this.

Now, as per the rules, I am supposed to share 10 little known things about myself and then pass on to seven lucky recipients.

However, given there is very little about myself I haven't already yakked about all over the interwebs, I have decided to list 10 little known things about well-known people:

1. King Henry VIII of England had a collection of 400 fipple flutes, including one shaped like a walking stick. Now you know.

2. Mahatma Gandhi spoke English with an Irish accent. Apparently one of his first teachers was Irish. Ah begorah!

5. If Bill Gates drops a thousand-dollar bill, he needn’t even bother to pick it up because in the four seconds it would take him to pick it up, he would’ve already earned it back.

6. Comic actor Jack Black is the son of rocket scientists. His mother worked on the Hubble telescope. Maybe there's something to that whole "skips a generation" theory.

7. Abraham Lincoln's law office was notorious for it's clutter, much to the consternation of his assistants. On his desk, Lincoln kept one envelope marked "When you can't find it anywhere else, look into this." This is apparently the same technique my husband employs.

8. The legend of George Washington skipping a silver dollar across the Potomac River, an action undertaken mainly to appall Thomas Jefferson, who was mired deeply in debt at the time, was founded in accident. Washington was actually trying to kill a duck, but missed.

10. Charles Lindbergh was the first person to develop an artificial heart. You know, when he wasn't flying solo over the Atlantic or anything.

There, don't you feel all edumacated?

As for the people I'd like to pass this on to, well, I have given out a couple of awards lately to my little bloggy enclave, so I want to spread the love a little to some new blogs I have discovered.

First, to Caitlyn Nicholas - a real, honest-to-goodness author, who also has a wicked sense of humour, is fully in touch with her inner grumpy old lady and who shares my love of growing things to eat. I promise, Caitlyn, I WILL get around to reading your books!

Next, to Daffy at Batcrap Crazy. Ever since I read the name of her blog, I've not been able to get enough of this wise-cracking sassy lady, and her tales as a sign-language interpret in an inner-city school.

Now, the only male blogger I follow (so he must be good!), Travis at I Like to Fish. Wicked funny, and an absolute goldmine into how the male mind ticks.

Next Cat at Wouldn't it be Loverly. You know when you get to know someone and your lives seem to mirror each others? Cat is that.

Now, Krissa at Halfasstic. Another woman who can really work up a great rant, whilst keeping the funny side of life foremost.

And last, but certainly not least, Liss at Frills in the Hills. Single-handedly responsible for over-hauling our weekly meals, she has great, easy recipe ideas, funny mumma tales and all sorts of stuff that appeals to the "Suzie Homemaker" in me.

So please stop by and check out these great gals, and guy. Enjoy!